Biomolecules is a very important chapter and requires detailed understanding of the concepts. This topic is often asked in the examination and the students need to be thorough with the concepts.

The students can learn the structure, properties and classification of various biomolecules such as carbohydrates, nucleic acids, etc. These concepts are also taught in further studies. Therefore, the students need to be thorough with the basics.

Question 1.
Glucose and sucrose are soluble in water but cyclohexane and benzene (simple six-membered ring compounds) are insoluble in water. Explain.
Answer:
Both glucose (C6H12O6) and sucrose (C12H22O11) are organic compounds and are expected to be insoluble in water. But quite surprisingly, they readily dissolve in water. This is due to the presence of a number of OH groups (five in the case of glucose and eight in sucrose) which are of polar nature. These are involved in the intermolecular hydrogen bonding with the molecules of H2O (water). As a result, both of them readily dissolve in water.
Benzene (C6H6) and cyclohexane (C6H12) are hydrocarbons which don’t have any polar group. They, therefore, don’t dissolve in water since there is hardly any scope of hydrogen bonding in their molecules with those of H2O (water).

Question 3.
How do you explain the absence of an aldehydic group in the pentaacetate of D-glucose?
Answer:
Glucose, as we know is an aldohexose and it is expected to give the characteristic reactions of the aldehydic group e.g., action with NH2OH, HCN, Tollen’s reagent, Fehling reagent etc. However, the pentadactyl glucose formed by the acylation of glucose with acetic anhydride does not give these reactions.

Question 7.
What products would be formed when a nucleotide from DNA containing thymine is hydrolysed?
Answer:
The products obtained are 2-deoxy-D-ribose, phosphoric acid, and thymine.

Question 8.
When RNA is hydrolysed, there is no relationship among the quantities of different bases obtained? What does this fact suggest about the structure of RNA?
Answer:
As we know, a molecule of DNA has a double-strand structure, and the four complementary bases pair each other. Cytosine (C) always pairs up with guanine (G) while thymine (T) is paired up with adenine (A). Because of the presence of the double-strand structure, when a molecule of DNA is hydrolysed, in each pair the molar ratio of the bases remains the same. However, this is not seen when RNA is subjected to hydrolysis. This suggests that RNA has not a double-strand structure like DNA. It exists as a single strand.

Question 1.
What are monosaccharides?
Answer:
Monosaccharides are carbohydrates which cannot be hydrolysed to smaller molecules. Their general formula is (CH2O)n where n = 3 → 7. These are of two types. Those which contain an aldehyde (-CHO) group are called aldose and those which contain a keto (C = 0) group are called ketose. They are further classified as triose, tetrose, pentose etc. according to the no. of carbon atoms present (3, 4, 5 respectively).

Question 6.
What is glycogen? How is it different from starch?
Answer:

Question 8.
What is the basic structural difference between starch and cellulose?
Answer:
Starch is not a single component. It consists of amylose and amylopectin. In contrast, cellulose is a single compound. Amylose is a linear polymer of α – D glucose while cellulose is a linear polymer of β -D glucose. In amylose, C1 – C4 α- glycosidic linkage is present, whereas in cellulose C1 – C4 β- glycosidic linkage is present. Amylopectin has a highly branched structure.

Question 9.
What happens when D-glucose is treated with
(i) HI
(ii) Bromine water
(iii) HNO3?
Answer:
(i) Reaction with HI

Question 12.
Define the following as related to proteins
(i) Peptide linkage
(ii) Primary structure
(iii) Denaturation.
Answer:
(i) Peptide Linkage: Proteins are the polymers of a-amino acids which are connected to each other by peptide bond or peptide linkage. Chemically, peptide linkage is an amide formed between -COOH group and -NH2 group. The reaction between two molecules of similar or different amino acids, proceeds through the combination of the amino group of one molecule with the carboxyl group of the other This results in the elimination of a water molecule and formation of a peptide bond -CO-NH-. The product of the reaction is called a dipeptide because it is made up of two amino acids. For example, when carboxyl group of glycine combines with the amino group of alanine we get a dipeptide, glycylalanine.

(iii) Denaturation: Protein found in a biological system with a unique three-dimensional structure and biological activity is called a native protein. When a protein in its native form, is subjected to physical change like change in temperature or chemical change in pH, the hydrogen bonds are disturbed. Due to this; globules unfold and helix get uncoiled and protein loses its biological activity. This is called denaturation of protein. During denaturation 2° and 3° structures are destroyed but 1° structure remains intact. The coagulation of egg white on boiling is a common example of denaturation. Another example is the curdling of milk which is caused due to the formation of lactic acid by the bacteria present in milk.

Question 13.
What are the common types of secondary structures of proteins?
Answer:
Secondary structure of a protein refers to the shape in which a long polypeptide chain can exist. These are found to exist in two types :

(a) α-Helix structure: If the size of the R-groups is quite large, the hydrogen bonding occurs between > C = O group
of one amino acid unit and the > N-H group of the fourth amino acid unit within the same chain. As such the polypeptide
chain coils up into a spiral structure called right-handed ct- helix structure. This type of structure is adopted by most of the
fibrous structural proteins such as those present in wool, hair, and muscles. These proteins are elastic i.e., they can be
stretched. During this process, the weak hydrogen bonds causing the α- helix are broken. This tends to increase the length of
the helix like a spring. On releasing the tension, the hydrogen bonds are reformed, giving back the original helical shape. 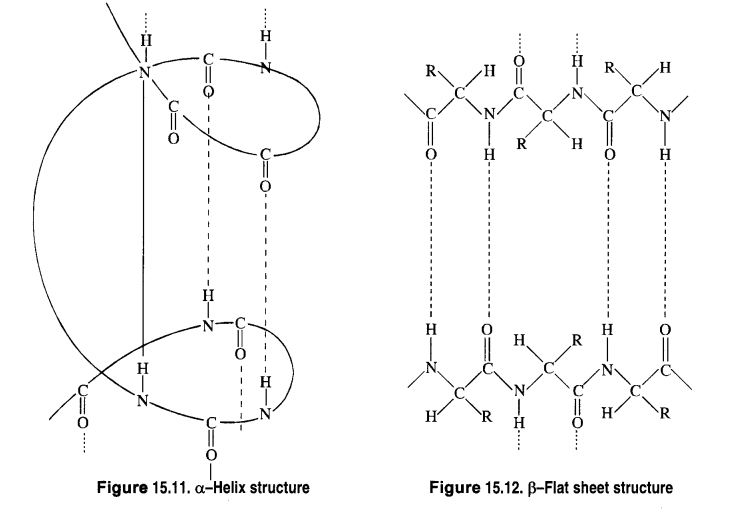 Question 16.
How do you explain the amphoteric behaviour of amino acids?
Answer:
Amino acids have basic (NH2) and acidic (COOH) groups. These are, therefore, amphoteric in nature. However, they exhibit these characters in the amino acid molecule itself i.e., NH2 group (basic) accepts a proton from COOH group (acidic) in the same molecule. Therefore, a-amino acid exists as a dipolar ion.

Question 17.
What are enzymes?
Answer:
We have learned in the study of carbohydrates that these are body fuels i.e., they provide the necessary energy to the body and
keeps it working. Actually, the human body is just like a furnace in which chemical reactions take place and are responsible for the digestion of food, absorption of appropriate molecules, and production of energy. The entire process involves a series of reactions that are catalyzed by biocatalysts known as enzymes. Thus, enzymes may be defined as:
biological or biocatalysts which catalyse the reactions in living beings.
All enzymes are basically globular proteins. Enzymes are very specific for a particular reaction as well as for a particular
substrate. These are generally named after the compounds or the class of substances with which they are linked or work.

Question 19.
How are vitamins classified? Name the vitamin responsible for the coagulation of blood? (C.B.S.E. Outside Delhi 2015)
Answer:
On the basis of their solubility in water or fat, vitamins are classified into two groups:
1. Fat-soluble vitamins:
Vitamins that are soluble in fat and oils, but not in the water, belong to their group.
For example Vitamins A, D, E, and K.

2. Water-soluble vitamins:
Vitamins that are soluble in water belong to their group.
For example, B group vitamins (B1, B2, B6, B12, etc) and vitamin C.
However, biotin or vitamin H is neither soluble in water nor in fat.
Vitamin K is responsible for the coagulation of blood.

Question 20.
Why are vitamin A and vitamin C essential to us? Mention their sources.
Answer:
vitamin A: Soluble in water but insoluble in oils and fas. Destroyed by cooking or prolonged exposure to air. it increases the resistance of the body towards diseases. Maintains healthy skin and helps in the healing of cuts and abrasions. It is available in

Question 21.
What are nucleic acids? Mention their two important functions.
Answer:
Nucleic acids are biologically important polymers which are present in all living cells.

Two important biological functions of nucleic acids are (i) Replication and (ii) protein synthesis.
These are briefly discussed.
Replication: Replication may be defined as the process by which a single DNA molecule produces two identical copies of itself. 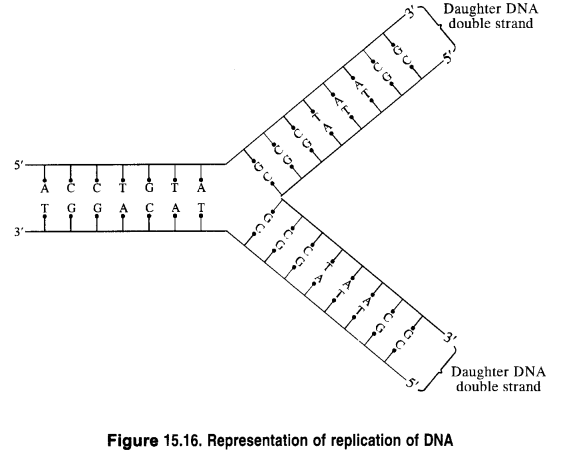 Replication is an enzyme-catalyzed process.  The process of replication starts with the partial unwinding of the two strands of the DNA double helix through the breaking of the hydrogen bonds between pairs of bases. Each strand then acts as the template (or pattern) for the synthesis of two new strands of DNA in the celllix environment. The specificity of base-pairing ensures that each new strand is complementary to its old template strand. As a result, two identical copies of DNA from the original DNA are produced. Each of these two copies is then passed on to the two new cells resulting from cell division. In this way, hereditary characters are transmitted from one cell to another. 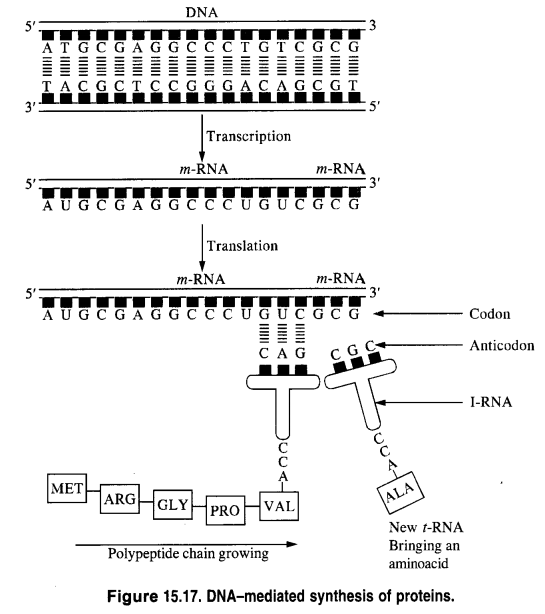 Question 22.
What is the difference between a nucleoside and a nucleotide?
Answer:
A nucleoside contains a pentose sugar and base (purine or pyrimidine) while in the nucleotide, a phosphoric acid component is also present.
Arrangement of constituents in Nucleic Acids. These are, intact, three building blocks in nucleic acid. A combination ol
base and sugar are known as a nucleoside. Similarly, base, sugar, and phosphates from nucleotides while nucleic acids are
polynucleotides which means that these are the polymers of nucleotides.

Question 24.
Write the important structural and functional differences between DNA and RNA.
Answer:

Question 25.
What are the different types of RNA found in the cell?
Answer: