Polymers are very large molecules having high molecular mass. These are also known as macromolecules. This chapter explains the mechanical properties and applications of polymers. The classification of polymers is also described in detail.

The chapter gives an overview of different polymerization reactions. The chapter explains that the polymers are the backbone of four major industries, plastic, elastomers, fibres and paints.

Question 1.
What are polymers?
Answer:
The word polymer has a Greek origin where poly means many and mers or meros stands for unit or part. Thus, the p

olymer may be defined as a substance of a high molecular mass (103 – 107 u) formed by the combination of a large number of simple
molecules called monomers by chemical bonds. The process by which monomers are converted into polymers is called polymerization.

Question 3.
Write the names of the monomers of the following polymers:

Buna – S: It is a co—polymer of 1. 3 – butadiene and styrene and is prepared by the polymerisation of these components in the
ratio of 3 : 1 in the presence of sodium.

Buna-N (Nitrile rubber):  h is a co-polymer of buta-1. 3-diene and acrylonitrile. It is formed as follows:

Question 6.
Arrange the following polymers in increasing order of their intermolecular forces :
(i) Nylon-66, Buna-S, Polythene
(ii) Nylon-6, Neoprene, Polyvinyl chloride
Answer:
We have studied the classification of polymers based upon intermolecular forces. These follow the order :
Elastomers < Plastics < Fibres.

Question 1.
Explain the terms polymers and monomers.
Answer:
Polymers are a high molecular mass of macromolecules composed of repeating structural units derived from monomers. Polymers have a high molecular mass (103-107u). In a polymer, various monomer units are joined by strong covalent bonds. Polymers can be natural as well as synthetic. Polythene, rubber, and nylon 6,6 are examples of polymers.

Monomers are simple, reactive molecules that combine with each other in large numbers through covalent bonds to give rise to polymers. For example ethene, propene, styrene, vinyl chloride.

Question 2.
What are natural and synthetic polymers? Give two examples of each.
Answer:
Natural polymers:
Natural polymers are high molecular mass macromolecules and are found in nature mainly in plants and animals. For example, protein, nucleic acids, starch, cellulose, etc.

Question 5.
Define the term polymerisation. (C.B.S.E. Delhi 2008)
Answer:
A very widely used polymer is polyethylene which is formed by the polymerisation of ethylene molecules (monomers) by heating under pressure in the presence of oxygen.

It may be noted that all the monomer units in a polymer may or may not be the same, In case, they are the same as in case of polyethylene, then the polymer is called homopolymer. On the other hand, if they happen to be different, then the polymer is known as copolymer or mixed polymer. For example, the monomer units in terylene are ethylene glycol and terephthalic acid. Similarly, hexamethylenediamine and adipic acid are the monomer units of nylon-66. Both are co-polymers or mixed polymers. We shall discuss these at a later stage in the present unit.

Answer:
It is a homopolymer in nature. It has only one type of monomer units i.e., NH2 – CHR – COOH. These area-amino acids.

1. Elastomers: In these polymers, the intermolecular forces are the weakest. As a result, they can be readily stretched by applying small stress and regain their original shape when the stress is removed. The elasticity can be further increased by introducing some cross-links in the polymer chains. Natural rubber is the most popular example of elastomers. A few more examples are of: buna-S, buna-N and neoprene.

2. Fibres: Fibres represent a class of polymers which are thread-like and can be woven into fabrics in a number of ways. These are widely used for making clothes, nets, ropes, gauzes etc. Fibres possess high tensile strength because the chains possess strong intermolecular forces such as hydrogen bonding. These forces are also responsible for close packing of the chains. As a result, the fibres are crystalline in nature and have also sharp melting points. A few common polymers belonging to this class are nylon – 66, terylene and polyacrylonitrile etc.

3. Thermoplastics: These are linear polymers and have weak van der Waals forces acting in the various chains and are intermediate of the forces present in the elastomers and in the fibres. When heated, they melt and form a fluid which sets into a hard mass on cooling, Thus, they can be cast into different shapes by using suitable moulds. A few common examples are polyethylene and polystyrene polyvinyls etc. These can be used for making toys, buckets, telephone apparatus, television cabinets etc.

4. Thermosetting plastics: These are normally semifluid substances with low molecular masses. When heated, they become hard and infusible due to the cross-linking between the polymer chains. As a result, they also become three-dimensional in nature. They do not melt when heated. A few common thermosetting polymers are bakelite, melamine-formaldehyde, urea-formaldehyde and polyurethane etc.

Question 9:
Explain the term co-polymerization and give two examples.
Answer:
Co-polymerisation is a process in which a mixture of more than one different monomeric units are allowed to polymerise. The copolymer thus formed contains multiple units of each monomer in the chain. The formation of buna-S copolymer in which the monomers are : buta-1, 3-diene, styrene and sodium is an example of co­polymerisation.
Another Example of co-polymer: Buna-S is a co-polymer of 1 : 3 – butadiene and styrene in the presence of sodium metal.

Question 10:
Write the free radical mechanism for the polymerisation of ethene.
Answer:
The polymerisation of ethene to polythene consists of heating or exposing to light a mixture of ethene with a small amount of benzoyl peroxide initiator The process starts with the addition of phenyl free radical formed by the peroxide to the ethene double bond thus regenerating a new and larger free radical. This step is called chain initiating step. As this radical reacts with another molecule of ethene, another bigger sized radical is formed. The repetition of this sequence with new and bigger radicals carries the reaction forward and the step is termed as chain propagating step. Ultimately; at some stage the product radical thus formed reacts with another radical to form the polymerised product. This step is called the chain terminating step. The sequence of steps may be depicted as follows :
Chain initiating steps: 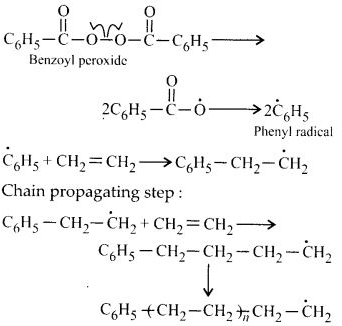 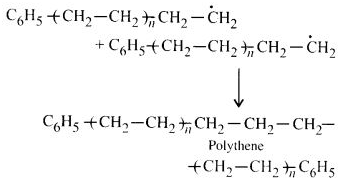 Question 11:
Define thermosetting and thermoplastic polymers with two examples of each.
Answer:
Thermoplastics are polymers which can be easily softened repeatedly on heating and hardened on cooling. Therefore, it can be used again and again. For example, polyethylene and polyvinyl chloride. Thermosetting polymers are those which undergo permanent change on heating. They become hard and infusible on heating and cannot be softened again. For example, Bakelite, and Melamine formaldehyde.

Question 12:
Write the monomers used for getting the following polymers :

Question 13:
Write the name and structure of one of the common initiators used in free radical addition polymerisation.
Answer:

Question 14:
How does the presence of double bonds in rubber molecules influence their structure and reactivity?
Answer:
Chemically natural rubber is polyisoprene in which monomer units are of isoprene i.e., 2-methyl-i, 3-butadiene. It is in fact, 1, 4 polymer in which monomers are linked through CH2 groups located at 1.4 positions. The residual double bonds are located at C2 and C3 positions in the isoprene units. All the double bonds have cis configurations. Thus, natural rubber is cis polyisoprene.

The high elasticity of natural rubber is due to the absence of polar groups and the cis-configurations about double bonds do I not allow the polymer chains to come closer. Therefore, only weak van der Waals’ forces are present. Since the chains are not linear, they can be stretched just like springs and exhibit elastic properties.

Question 18:
Identify the monomers in the following polymeric structures: 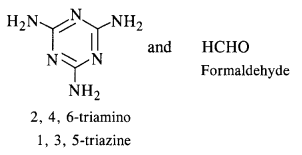 Question 19:
How is dacron obtained from ethylene glycol and terephthalic acid?
Answer: